A Book Boutique for Classical Calvinism 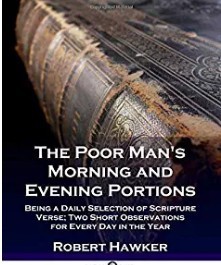 A Poor Man's Morning and Evening Portions by Robert Hawker

These daily meditations on Christian belief take the form of Bible quotations and discussions; one for the morning, and one for the evening of each day.

A great companion for ordinary believers throughout the year, this book’s intention is to offer spiritual guidance and comfort to followers of God who count among the laboring poor. In the 19th century, tough physical labor performed under grueling conditions was common – the long hours demanded by such toil meant that many Christians, though genuine of faith, simply lacked the time for spiritual contemplation. It is for these neglected faithful that Robert Hawker created this book.

Each morning and evening portion contains between 150 and 600 words; the size of a newspaper article or bulletin. The lessons and thought offered are to-the-point, teaching about a given Bible phrase, psalm, or proverb. Every nugget of spiritual wisdom is prefaced with a Biblical quotation that directly pertains to the author’s explanations and instruction.

Robert Hawker was a minister in Plymouth, England in the late 18th and early 19th centuries. His public preaching and writings made him one of the best-known and appreciated men of God in his region, and he was among the first churchmen to advance the notion of Sunday School. The plight of the local poor saw Hawker engage in many causes; overseeing funds to support locals who were hungry or destitute, as well as women who had fallen into vice.

Save this product for later