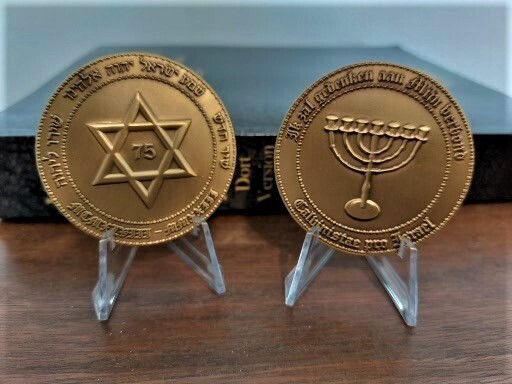 Presenting a limited edition of a commissioned medallion celebrating the 75th Anniversary of the reestablishment of the State of Israel in 1948. Preceded by the Balfour Declaration of 1917, the Jewish people have at long last been able to return to their own land as citizens. A collector’s piece, this exquisite artifact is cast in antique gold and professionally minted according to exact specifications—an expansive 58.5mm in diameter (4mm/90g).

The obverse side depicts the Star of David, a Jewish emblem in weal and woe. The Hebrew letters provide a concise introduction to the Shema: “Hear, O Israel, the Lord our God.” Hearing, obeying יהוה—essential to the covenant relationship. The Hebrew on the left and right proclaims “O Sing to the Lord” and “A New Song.” The Roman Numerals mark the years 1948-2023, or 75 years. The reverse side pictures a potent symbol, the Menorah, a seven-branched candelabrum from the Tabernacle, Temple and synagogue. The Statenvertaling Dutch highlights God’s promise, “I shall remember My covenant.” The Latin in the bottom rung: “Calvinists for Israel.”
According to Prof. Dr. Herman Bavinck: Israel’s culture is advanced beyond any people on earth. The heroes of Israel have not been world conquerors, artists or philosophers but emissaries of God, carriers of His Word: prophets and psalmists, apostles and evangelists ... from them is Christ in the flesh.

> The Authentic Medallion in a premium Deluxe Black Velvet Showcase.